China’s Role in a Shared Human Future (Chapter Seven: The challenge of transculturality for the USA and China)

Author of the book

In a career in sociology spanning over 50 years, Martin Albrow PhD (University of Cambridge) held the Chair in Sociological Theory in the University of Wales in Cardiff before becoming Professor Emeritus in 1989. Since then, he has held visiting positions in numerous institutions, including the Eric Voegelin chair in Munich, and chairs in the London School of Economics, State University of New York, Stonybrook, and the Beijing Foreign Studies University. He has been Fellow at the Woodrow Wilson International Center for Scholars, Washington DC, and the Käte Hamburger Center for Advanced Studies, ‘Law as Culture’, Bonn University. He is now based in London.

His first visit to China was in 1987 on an observational tour with the State Family Planning Commission and in recent years he has contributed to the annual Symposium on China Studies with the Academy of Social Sciences and the Ministry of Culture of the PRC.

His specialties include social theory, organization theory and Max Weber’s thought, and he is internationally known for his pioneering work on globalization. His The Global Age: State and Society beyond Modernity (1996) won the European Amalfi Prize in 1997. Other books include Bureaucracy (1970), Max Weber’s Construction of Social Theory (1990), Globalization, Knowledge and Society (1990, ed. with E. King), Do Organizations Have Feelings? (1997), Sociology: The Basics (1999), Global Civil Society (co-editor) in 2006/7, 2007/8 and 2011 and Global Age Essays on Social and Cultural Change (2014).

This book is about China’s role in the world to come and includes the author’s recent explorations of China’s readiness to assume a global leadership role. The book effectively links the study of Max Weber, an important Western theorist during the global transformation of the nineteenth to twentieth centuries, with the study of Xi Jinping’s thinking during the global transformation from the twentieth to the twenty-first century. According to the author, on the one hand, Western classical theory can still provide the core ideas for rethinking today’s global cooperation. On the other hand, Xi Jinping’s ‘The Belt and Road’ initiative, though only a very recent attempt to show how China as a new player in the world can help to heal its divisions, has as its foundation Xi’s thinking on the governance of China, which has demonstrated that the initiative will serve as a means to promote global peace and cooperation rather than strengthen great power rivalries. The author believes that we can shape global ethics in the process of rediscovering the deep roots of common civilized values that will underpin the global cooperative recovery. This book will be translated and available in Chinese. It is expected it will help a wider readership from China and other countries and regions to understand China and how it can contribute to the shared human future.

Foreword by Anthony Giddens
Author’s Preface
Acknowledgments
Part One: China’s role in the globalizing world
Chapter One. The architectonic of ideas – Xi Jinping: The Governance of China
Chapter Two. Philosophical social science as a bridge from ‘Belt and Road’ to global governance
Chapter Three. Harmonizing goals and values: the challenge for Belt and Road
Chapter Four. Bridging the divides: China’s role in a fragmenting world
Chapter Five. Leadership for a people’s democracy
Part Two: Theory for the global social order
Chapter Six. Chinese social theory in global social science
Chapter Seven. The challenge of transculturality for the USA and China
Chapter Eight. Pragmatic universalism and the quest for global governance
Chapter Nine. Can there be a public philosophy for global governance?
Chapter Ten. How do we discover common values?
Chapter Eleven. The ‘community of shared destiny’ under conditions of imperfect understanding
Part Three: From Max Weber to global society
Chapter Twelve. Max Weber, China and the World: in search of transcultural communication – co-author Zhang Xiaoying
Chapter Thirteen. Weber and the concept of adaptation: the case of Confucian ethics – co-author Zhang Xiaoying
Chapter Fourteen. Max Weber, China and the future of global society
Postscript: A Chinese episode in the globalization of sociology
References
Publication History and Abstracts
Appendix: The Globalization of Chinese Social Sciences Book Series by Xiangqun Chang
Index
About the Author

Professor Martin Albrow is one of the foremost sociologists in the English-speaking world and one of the greatest experts on globalization, perhaps the most significant driving force of our times. In his pioneering work The Global Age (1996), written when the term ‘globalization’ itself was quite new, he set out the main dimensions of the profound changes that had begun to transform world society. In its most fundamental meaning, ‘globalization’ refers to the intensifying interdependence of individuals, institutions and states across the globe. … In this book Albrow does a remarkable job of shedding light on these extraordinary changes and on the pivotal role that China is likely to have in shaping their further evolution. As the United States pulls back from its former global role, China not only can, but must, assume a pivotal position in shaping world society for the better. ——Professor Anthony Giddens, from Foreword of this book

What is the process of incorporation of Chinese ideas and thinking into a transcultural public social science? Is the Belt and Road project the successor to Western economic globalization? Is Asia going to be the continent that works through the dilemmas of sustainable modernity? Martin Albrow is one of the very few social scientists who has the authority, experience and ambition to give us the answers, in this rich collection of essays. ——Professor Sam Whimster, Editor, Max Weber Studies

Professor Albrow’s book provides a fascinating counterpoint to Western-centric notions of China as a ‘rising power’. It is unique in providing a globalist view of how China understands its new role and how its leadership is already fundamentally reshaping the architecture of the world in the 21st century. China is becoming a global nation and this book explains how. In the process, sinology and global governance scholarship just got more properly global. ——Associate Professor Olaf Corry, PhD, University of Copenhagen

This is Vol. 4 in the Globalization of Chinese Social Sciences book series, edited by Xiangqun Chang, Director of Global China Institute and Honorary Professor of University College London, UK.

The UK-based Global China Press (GCP) is the first publisher specializing in dual language publications that focus on Chinese perspectives of the world and human knowledge and non-Chinese perspectives of China in a global context. The co-publisher of the present volume, New World Press (NWP), was founded in 1951, and is a member of the China International Publishing Group (CIPG). It publishes multilingual books on social sciences, literature, management and other disciplines that serve to introduce China to the world. As early as the 1980s, NWP published the China Study series in English, covering China’s economy, politics, ethnicity, population, history, sociology and anthropology. 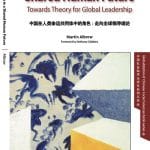 China’s Role in a Shared Human Future (Chapter Six: Chinese social theory...
Scroll to top
This site is registered on wpml.org as a development site.